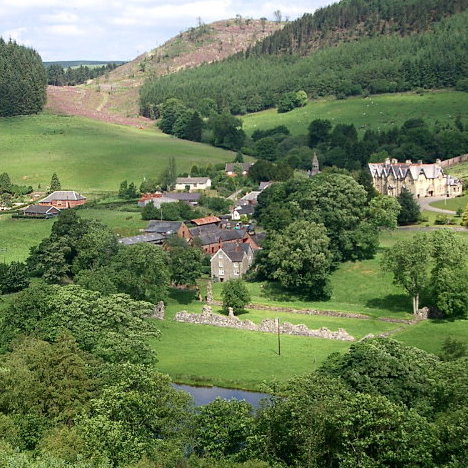 In my new book the The Return of Sir Percival, Guinevere, Queen of the Britons, and widow of the deceased Arthur Pendragon, has been forced to take refuge in a remote abbey, deep in the forest. This sanctuary offers the forlorn queen a measure of safety from the maelstrom of violence raging throughout the fallen kingdom, and a base from which to plan for the future, however bleak.

In my search for the ideal geographical location for this mythical abbey, I considered a number of alternatives, but ultimately decided upon the site of the former Cistercian abbey in mid-Wales, the Abbey Cwm Hir. All that remains of the abbey today, which was established in the twelfth century, is a haunting ruin located in a very small village bearing the same name. The site of the former abbey seemed an ideal place for Guinevere to seek sanctuary for a number of reasons. It is truly remote, the valley and surrounding hills are magnificent, and a series of rivers run through the area, one of which I used in a particular scene in the book. In the story (which takes place long before the monastery was built), a much larger monastic compound is located on the site. It contains a convent, a church, a great hall, and four stone towers, connected by a formidable curtain wall. This was the destination that my daughter Morgan and I visited, on the third day of our visit to the U.K. In the next post, I will describe this location in more detail, provide details of our meeting with the caretaker, Melwynn, and share more photographs.